Another problematic member of our field is the Utopian futurist, someone who thinks they can envision a perfect, or at least, a vastly better society than the one we live in today. A proposed perfect future society is never so good-looking when examined closely. The most famous example is the book Utopia by Sir Thomas More (1516), in which slavery was allowed, a perfect example of the difficulty of seeing beyond our cultural limitations in envisioning better futures. A much better strategy is to seek protopias, worlds that are not perfect by any means, but are measurably better along some set of variables of social progress that we consider particularly important.

For a broad collection of presumed utopias, and the various deluded leaders and writers who have proposed them, and the tragic forms of social control that have resulted, from 1490 BCE to 1998 CE, see the Faber Book of Utopias (1999) edited by John Carey. Positive images of the future are admirable, but when we value any imaginary future too greatly, we can miss and devalue all the amazing features of the present world. If we believe too much in a utopian future as an end, we can also devalue the means (our choices on the way there), which can make us morally neglectful or even dangerous. By living with our “head in the clouds”, we can also miss the many small steps needed right now to move toward a better future. As the utopian’s extreme positive fantasy fails to arrive, they can also flip and become dystopian pessimists in older age.

Marxists are a classic example of utopian futurists that once plagued Western academia, but who today are on the decline since the fall of the Soviet Union, as elder tenured professors retire. I had to sit through too many such teachers during my own undergraduate training. My fellow students and I could see where the young Marx got several insights on soft technological determinism right, then turned to utopianism in his ideas of communism and class struggle during his middle and later years. Utopians can be quite influential however. At one point in the mid-20th century, half of the world believed in this dysfunctional model of commerce and governance, as the excellent twenty-four episode documentary series Cold War, 1998, reminds us. 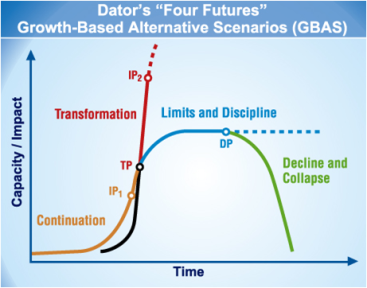 Utopians and Dystopians Focus on the Extremes,
While Discounting Normal (S curve) Futures.

Is the accelerating change model we’ve proposed in Chapter 7 just another utopian vision, or is it clear eyed and evidence-based? Some will call it utopian. You have to make that determination yourself. The late 21st century certainly won’t be without crime, violence, and failure states. We can expect a good deal of competition and chaos on the way to the technological singularity, and a vastly better and more stable future. Many better and worse paths can and will be taken by individuals, groups, and societies. But collectively, the acceleration of complexity seems to be part of the necessary and progressive nature of the world.

Recall Dator’s Four Futures, which tell us that at least four futures are occurring simultaneously, often to different societal actors in the same environment (picture left). These four futures are:

It is this kind of pluralistic and nuanced view of both the present and the future that the utopians often neglect to see.

As Kevin Kelly has said, good future thinkers will be protopian, not utopian. Our visions of the future should strive to be better, not perfect, and recognize that every transformation is disruptive. All four futures will always occur simultaneously, to different actors, in the process of reaching any better future. That means we need our own provisional hypotheses of progress (the root of the “pro-” prefix in protopian), and to conduct experiments and collect evidence on whether our hypotheses are supported by reality.

While all our images of the future will be imperfect and incomplete, some will reliably move us in a measurably better direction. Often this occurs in a dance we might call the “Evolutionary Three Step,” or, two steps forward, followed by one step backward. The more complicated the world gets, the easier it is for changes to have antagonistic pleiotropies (in biology, and we would argue in society). That means the more complex, diverse, and wealthy our societies get, some groups will always get least temporarily hurt as others progress. To stay innovative as a society, our insurance and political and legal systems need to account for that, and we must champion creative experimentation, and expect some temporary regression and chaos on the way to better futures. Being imperfect beings in a complex world, a largely trial and error approach is usually the best way we learn, and progress.