What kinds of values motivate these three types of thinkers, and how culturally universal are they? The social psychologist Shalom H. Schwartz, surveying more than 25,000 people in 44 countries, proposed a model of ten types of universal values that seem present in all human cultures, and fifty-six specific subtypes of these general types. If our evo devo model is valid, we should find some universal values clustering around the three poles of evolution, development, and adaptation (evo devo). Furthermore, two of the three clusters, evo and devo values, should be opposites in tension with each other in the creation of the adaptive third cluster, as we see in the Hegelian dialectic (thesis and antithesis, in opposition to each other, create the synthesis).

Fortunately it is easy to propose an evo devo structure for any proposed set of universal values. When we do so, we discover that they typically fit quite well, after a few adjustments. For example, we can group Schwartz’s ten types into Three Evo Devo Values Sets as we have in the picture at right. Note that in our treatment we have combined Achievement and Power, as well as Conformity and Tradition into single values. We do this because each dyad are not sufficiently different, in my view, to warrant being treated as separate universal categories. Schwartz is really offering us eight universal categories, not ten. 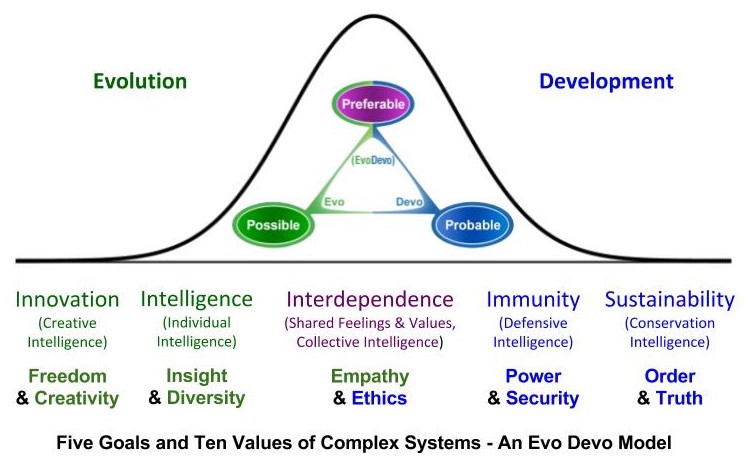 Using an evo devo frame, let’s now compare Schwartz’s model with our own version of universal values, derived in Chapters 7 and 11. Recall that we started with the Three P’s model, then we proceeded to the Five Goals and Ten Values, as we see in the picture at left. We can now arrange these ten values into three universal values sets, while comparing it to Schwartz’s model, whose values are given in parentheses below. Our treatment includes not only Empathy and Ethics in the evo devo category, but also Insight and Power. We’ve done this because these two values are the next closest to the core evo devo values, and it is easy to argue that they are also centrally adaptive, in any evo devo model that assigns the ten values to three competing sets.

Note that our evo devo model (right) includes a new central value, Insight, which was missing from Schwartz’s model. Our model also proposes that Schwartz’s Benevolence value must be separated into two central values, Empathy and Ethics, which are unique, and often in competition with each other. The four central values in our evo devo model are now a good representation of the values motivating bridgers, the group that Kirton argues typically make the best managers and leaders.

Along with separating Empathy and Ethics, which greatly improves our understanding of the role of leaders, perhaps the most important values update in our model is the addition of Insight, which we called Dematerialization in Chapter 7. As we’ve seen, we could also call insight by a number of other labels, including Intelligence, Understanding, Learning, or Mind. In this view, evolving and developing Ethical, Empathic, Intelligent, and Powerful systems are the central goals of adaptiveness. 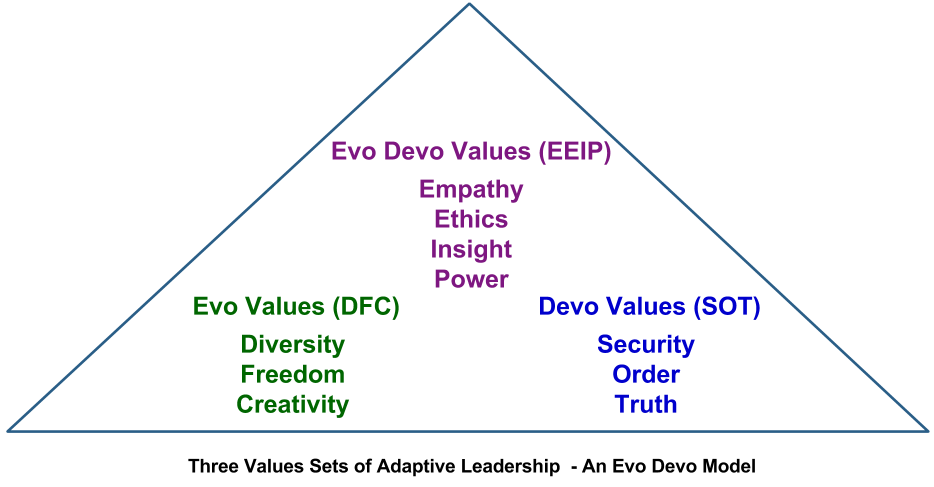 At right is a mnemonic for remembering these Three Universal Values Sets. In the military, the acronym DFC stands for Desired Future Conditions. We can think of greater Diversity, Freedom, and Creativity as top evolutionary goals. In law, the acronym SOT stands for Statement Of Truth. We can think of Security, Order, and Truth as top developmental goals. EEIP is the sound a bird might make, sitting at the top of our evo devo pyramid of values. That bird is reminding us that Empathy, Ethics, Insight, and Power are the four core values of adaptive systems. This works pretty well for daily use.

For individuals who self-identify at each of the three poles in the Kirton test, these three values sets should be among their most commonly preferred types. Those who favor the Evo values pole are Innovator-Experimenter-Creators, those who favor the Devo values pole are Protector-Investigator-Anticipators, and those favoring values at the Evo Devo pole are Strategist-Adapter-Managers, in their primary motivations. If evo devo theory is true, some version of these three values sets should be found not only in all cultures on Earth, but on all planets with intelligent life. This may be a particularly universal way that intelligent beings, anticipate, create, and manage complexity.

Good leaders can be motivated by any combination of these values, and they thrive in all three corners of the evo devo triangle. But if leaders also wish to be great managers and leaders of others, they should also cultivate one or more of the evo devo values, so they can speak to both the anticipators and the creatives (the two most fundamental types) through the values sets they hold dear, and be able to relate them to the central adaptive values of Empathy, Ethics, Insight, and Power.

Which of these ten values types would you say are your top three, most often? Which are your weakest three? In which values set or sets do you tend to cluster, or are you balanced across all three?

Consider next the needs model of human development theoretician Manfred Max-Neef, who proposes nine fundamental human needs: Creativity, Freedom, Understanding, Affection, Participation, Identity, Protection, Sustenance, and Leisure. Needs and values aren’t quite the same thing, but they are close enough for us to apply the Ten Values model, in search of a more evo devo perspective on individual needs. We can classify Max-Neef’s needs according to a Five Goals and Ten Needs model, as follows:

In this scheme, we propose that Max-Neef’s need (value) of Participation/Community is not separate from either Empathy or Ethics, the two universal ways (heart and mind) that we create and engage in community. Likewise, Sustenance and Leisure are different facets of the same need, to find sustainable order. This is a helpful expansion of the meaning of the value/need we call “order”. Order doesn’t just cover tradition and conformity, but any process we think will keep us and our loved ones healthy and sustained. Those processes are our most important forms of order, as they allow everything else to happen. (When we talk about Leisure as Recreation/Play, that might fit better under Freedom/Autonomy). Note that our model also argues that Max-Neef is still missing three of the ten universal values, the ones in italics above. He was missing Identity/Ethics, a particularly central need, in his first formulation of universal needs, and he used significantly less useful labels in earlier models, so he has moved, in my view, in the right direction.

We leave it to the future to classify Adler’s, Rokeach’s and other values systems into the Three Evo Devo Values Sets as we have done with Schwartz’s and Max-Neef’s work above. What have we missed in the above analysis? Each of these values/goals models are quite preliminary at present. We could have easily added a few more values categories, as sets of opposing evo devo pairs. But there is a declining return to such efforts, and at some point, we have a model useful enough to mentally internalize and use it in various environments as a predictive, universal approach to adaptive values. Perhaps this model will suffice for you, as it presently does for me.

If better understanding of adaptive goals and values that we will need in the workplace, in society, and in future intelligent systems comes from any of this work, it will have been well worth the effort.