The classic change model is the sigmoid function, or S-curve, given this name due to its shape. It is also called the Gompertz curve, after the mathematician who first discovered it in natural systems. Logistic growth may be the best-known example of S-curve behavior.  Many growth processes, including population growth, the diffusion of innovations, human and machine learning, language change, and chemical reactions, exhibit varying speeds of exponential growth at first, then they hit an inflection point, where they start to mature, running into competition or resource scarcity, and the rate of growth decelerates. Next they enter a saturation phase, where growth greatly slows or even stops. The four phases of such growth (Initiation/Birth, Acceleration/Growth, Deceleration/Maturing, Saturation) can be seen in the logistic growth curve at right. GP (growth point), IP (inflection point) and SP (saturation point) are points on the curve after which careful observers can notice growth conditions have changed. 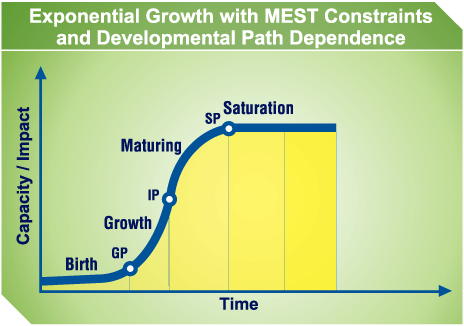 Exponential growth usually runs only for as long as there are easily available resources. As a population’s interaction space expands to cover most of the relevant environment (a biome, a market, the easily available idea, knowledge, or variation space), its replication will start to slow, and it eventually saturates, reaching the “carrying capacity” of that particular environment, a point on the X-axis at or just above the saturation level.

Forecaster Theodore Modis has done a lot of deep thinking about S-curves. His books Predictions (1992) and Predictions: Ten Years Later (2002), are great reads, and offer many insightful examples of these curves applied to processes of change. Nevertheless, he tends to see them everywhere, and to discount Exponential growth (E-curves) and ignore superexponential growth (J-curves), as in his article, The Singularity Myth, Technological Forecasting & Social Change (2006). We should always keep in mind that our favorite curves may not be the ones that are the most relevant to the particular system or period under study. 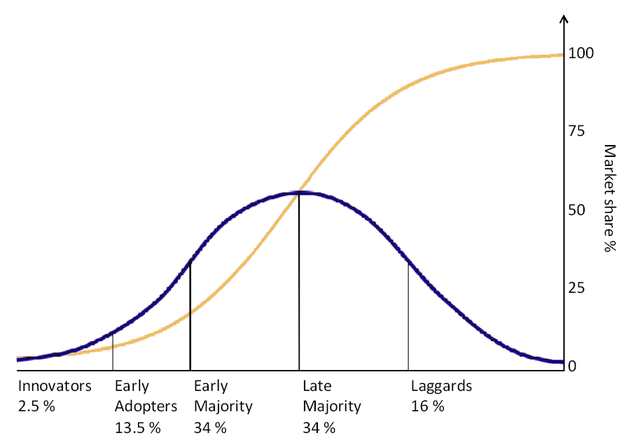 Phases of technology adoption follow an S-curve, as Everett Rogers described in his classic, Diffusion of Innovations, 5th Ed. (2003). As adoption phases progress, from Innovators to Laggards, an initial exponential growth phase goes through an inflection, then saturates.

The history of mass-market technology adoption shows these S-curves in historical data. Note that highly valuable technologies, like automobiles and radio, had nearly as steep initial adoption curves in the 1910’s and 1920’s as the initial curves for such modern must-haves as cellphones and the internet, in the 1990s. A range of factors, like technology cost, value, ease of use, and marketing, are important to driving these S-curves to their saturation points.

Yet this big picture perspective also shows a general speedup in adoption of valuable new innovations the more connected we become. More recent innovations, like computers, cellphones, and the internet, have very steep exponential phases. Adoption of dematerialized products and services, like new software platforms or apps, is vastly faster still. If those had been included, this chart would be an even more valuable metric of accelerating adoption.