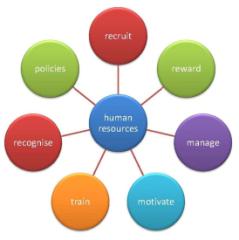 Our last core leadership department is Human Resources, and the stewardship of the human capital of the firm. Historically, HR’s ability to contribute foresight and value to the firm has gone unrecognized by some execution-, sales- or strategy-focused top executives, to the detriment of those companies.

This department is typically responsible for two of the top twenty foresight specialties, in alpha order as follows:

In Human Resources, too many leaders still follow outdated paradigms that don’t fully appreciate the unique competitive advantage that comes from finding and using better methods of recruiting, hiring, compensation, benefits, performance management, learning and development, idea generation and creating a company culture with better values, including a foresight orientation.

HR leaders can drive company culture to a foresighted vision and mission. Ann Rhoades, Built on Values (2011) and Jon Katzenbach, Stop Blaming Your Culture (PDF), Strategy+Business (2011), describe how large organizations like the US Marine Corps, Aetna, JetBlue, Southwest Airlines, and P.F. Chang’s China Bistro have done culture turnarounds, returning to core values and restoring foresight after it was long absent.

A new generation of HR leaders are using insights from behavioral economics, nudging theory, industrial psychology and people analytics to do data-guided experiments, find and reward top managers and employees, and allow employee freedoms and self-leadership in their work much more than in previous eras. Read Waber’s People Analytics (2013), Pentland’s Social Physics (2014), and Thaler and Sunstein’s Nudge (2009), for more on the frontier of modern HR. The first People Analytics Conference convened in 2014 at the Wharton School of Business at U. Penn. There is much to learn from these newer methods, and they are the cutting edge of HR foresight work.

In Performance Management, an open book approach to bottom-up, employee-driven development of financial and operations plans, responsibilities, and benefits is outlined in The Great Game of Business (2013), as mentioned earlier. Schemes for conversion of a company to a greater percentage of employee ownership as the original founders retire is another bottom-up HR trend revitalizing a few mature-stage companies (see NCEO). Other foresight- and innovation-promoting HR methods include crowdsourced recruitment (JobHuk), 360 degree and crowdsourced reviews, performance benchmarking, and Ten and Twenty Percent Time, where employees meeting expectations given the freedom to work on projects outside their job description for a half to a full day out of five. Pioneers in the latter include 3M, Hewlett-Packard, and Google. Google’s Gmail is a famously useful product that came out of that level of employee freedom because a small group of engineers thought it was a more important product to be developing than the current product mix on offer. Providing this free time to any employee who is meeting expectations, and then rewarding successfully innovative employees can be a powerful motivator of job performance.

Learning & Development (L&D) may be the HR function where foresight process and values can be most aggressively championed. Peter Senge’s The Fifth Discipline (2006), its Fieldbook (1994), and his work since offers a motivating vision of the learning organization. A few firms, most famously Procter & Gamble, have executed this model well. In a world of accelerating technological and business change, empowering employees to do continual just-in-time learning, and to apply that learning in new innovation and strategic foresight, improving strategies, plan, or actions, can give a critical advantage to your firm.

With respect to hiring, every generation has some of its own unique traits, and the Millennials (Gen Y), (born between 1983 and the early 2000s) are no exception. Among the traits that have been proposed for this demographic, at least in the US, include a stronger desire to do rather than be told something, a desire for social and environmental justice, a sense of entitlement and need for praise, low interest in politics and global affairs, and an expectation of rapid job change. But it’s also easy to overinterpret these demographic stories, as writers like Simon Sinek do when he calls them “A Generation of Weakness” (2017). Certainly some of more privileged millennials feel overly entitled, and have been given too much protection from failure. But it’s easy to tell self-serving stories about how different we are from our children.

We need caution whenever we make generational stereotypes, as people are generally more similar than they are different, generation to generation, within any culture. Two cultures, by contrast, can easily be more different than two generations, as we’ll see in our discussion of sociocultural foresight, but even here, as globalization continues, cultural differences will surely continue to moderate with time. Whether we like it or not, the smarter our electronic education systems get, and the more connected we all are, the more we become one global superculture.

Perhaps the biggest problem for most millennials today is getting through their education without taking on massive debt, then finding good jobs, and staying relevant in the job market, and coping with new, far more plutocratic economic, political, and technological conditions that their parents did not had to face. With regard to the latter, a McKinsey Global Institute study, Disruptive Technologies, 2013, proposes knowledge work automation will continue to be a major job turnover force between now and 2025. In the context of our Global Financial Crisis of 2008 and Great Recession (2008-2012), our current generation of young workers is suffering today from a deficit of technical skills relative to demand, and the rapid turnover and lack of good jobs to match their skills in marketplace.

But given that global technical productivity, and thus corporate profits and economic growth all look strong for the longer term, as various authors including Toffler in Revolutionary Wealth (2007), Diamandis in Abundance (2012), and Brynjolfsson and McAffee in The Second Machine Age (2014) persuasively argue, the top challenges for modern HR leaders include better global recruitment strategies and more valuable just-in-time education for employees.  Today’s best employees must be increasingly lifelong learners, comfortable with change, and able to work well with colleagues around the world, in both emerging and developed nations.