In 1979, political scientist and futurist Jim Dator, director of the U. Hawaii at Manoa Ph.D. program in Alternative Futures, published a groundbreaking model of images of social change in an edited volume, Perspectives on Cross-Cultural Psychology. Dator’s model proposed that our main images (depictions, stories, scenarios) of societal futures can be classified into four recurring groups. His original labels for these were Continuation, Collapse, Disciplined Society, and Societal Transformation.

Dator discovered these narratives in empirical research, analyzing images of the future at the Hawaii Research Center for Futures Studies (est. 1971). He calls them The Four Generic Images of the Futures of the Manoa School. He has applied them extensively in five decades since, sometimes changing their labels to fit various contexts. Our footnotes below* reference some of his classic work on how to define, recognize and apply these four key images in foresight work.

In 2005, futurist John Smart developed his own interpretation Dator’s four images, based on his training under living systems theory pioneer James Miller. His work should not be misconstrued as representing either Dator’s or the Manoa School’s views, as it differs from those views in important ways. In particular, Dator considers the four stories to be generic images of the future. Smart considers them to be both generic images and generic growth phases, found in all self-maintaining human systems. As a result, Smart gives these Four Futures slightly different titles and definitions, as follows: 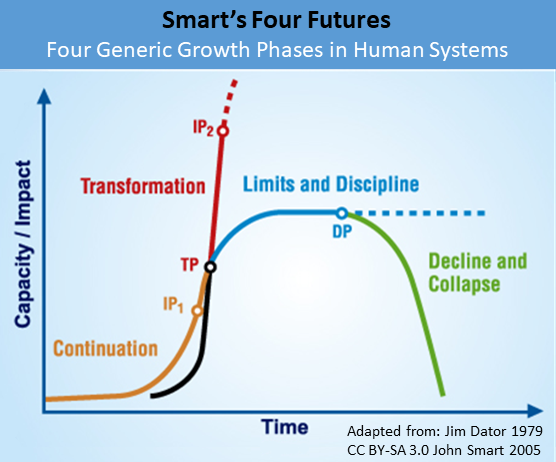 He maps them to four classic phases of growth, in adaptive capacity or impact, of any self-improving, evolutionary and developmental system, whether biological, organizational, social, economic, or technological (picture right). While we can find these four phases in any living organism, we can see them best (particularly Transformation) in human systems, which have have been noticeably self-improving, between generations, since the advent of human intelligence.

Said another way, these four futures represent four key ways that self-improving systems must manage their internal and environmental complexity change over time. Note that growth here does not simply refer to economic, political power, population, or information growth, but to the growth of adaptive capacity or impact in networks of organized complexity themselves, in any autopoetic system (self-maintaining, self-improving, evo-devo), regardless of substrate. Note that if any complex system is self-improving, it is also dependent on other simpler autopoetic systems for its survival. Human life depends on simpler life. Political systems, organizations, and technologies depend on humans, and so on. All such adaptive systems are subject to these four growth phases, in Smart’s view.

Consider how these four growth phases can be found in all living (eg. evo-devo) systems:

We can find these four phases in any self-maintaining network of social, organizational economic, and technological complexity as well. Note that the Transformation phase always includes some faster-than-previous form of exponential growth in the first growth phase of the next generation of the self-renewing system (whether living, organizational, social, economic, or tech). That new system, being a relatively finite system in a rapidly-changing environment, will eventually enter its own phase of Limits and Discipline, then Decline and Collapse (recycling). The next generation (new youth, team, org, political network, growth frontier) will lead the Transformation. Said another way, in a complex world, parts of all of us, both individually and as a network, are always growing—via Continuation or by Transformation—and other parts are always dying—via Limits and Discipline or by Decline and Collapse—at the same time.

One of the most obvious yet poorly-modeled features of adaptive networks is that they have continuously accelerated in physical and informational complexity over Earth’s history, a phenomenon generally called accelerating change. Another less obvious feature of adaptive systems is that they are always evo-devo in nature. They are always both evolutionary (exploratory, creative, unpredictable) and developmental (constrained, cyclical, predictable) in their dynamics—at the same time.

Since the advent of humanity, all life on Earth has lived in an environment that we have stated elsewhere (see The Great Race to Inner Space) that is becoming profoundly more miniaturized and informational, and increasingly less macroscale and physical, in its most general and impactful forms of adaptive complexity and intelligence. We speculate that this acceleration is an undiscovered law of nature, as fundamental as gravitation. Some futurists, especially some deeply and rightly concerned with issues of environmental sustainability and social justice, still deny that environmental acceleration is real, or that it can continue much further without catastrophe. Accelerating human systems have rapidly depleted planetary resources under consumer capitalism, they are caused a sixth great species extinction and they are causing still-uncontrolled climate change. Yet human systems have also been continually transforming, at their leading cultural and technological edges, into more sustainability focused, and profoundly more efficient and virtual modes of organization. We must be vigilant to continue these transformations, as stewards of the many problems we have created for ourselves and our planet.

Some scholars also ignore or discount the apparently developmental nature of this acceleration, the ways that Earth’s most generally adaptive complex networks grow more integrated, intelligent, ethical and empathic, and conscious, at their leading holistic edge, under selection. If accelerating complexification can continue to evolve and develop locally, right up to the physical limits of miniaturization and virtualization, which scientists tell us we are nowhere near at present,  these four generic growth phases, including transformation, will continue to be relevant for the foreseeable future. All definable (eg, finite) complex systems will be faced with these four choices in various aspects of their selves, at various times in various selection environments: They must either grow as usual, encounter limits, decline and recycle, or renew (transform) their very identities. There is no way out of these four growth dynamics, in our view.

One major insight for foresight practitioners seeing to influence and improve personal, team, organizational, societal, or global change, is to recognize that all four change stories are often being told by different parties at the same time, or by the same party at different times. Each can be a valid perspective for the individuals and groups telling each change story. Our clients may be motivated tell each story at different times. We in turn may need to ask questions, research trends, analyze emerging issues, or construct scenarios that surface vital images and growth stories that are being neglected or discounted in favor of a more limited view of change.

Discovering which stakeholders represent each point of view, and describing any other hybrid views that may exist, is thus a very helpful Learning (Skill 1 of the Eight Skills) goal in foresight research.

Let’s look briefly at examples of these and other growth curves now, along with a few lesser-known curves, to get a better understanding of probable, possible, and preferable change.