In STEEPS categorization, this is primarily a Political/Policy counterfactual. This is clearly low-probability for its time, but I think it offers us a window into national security law and policy in a more smart agent-enhanced, democratic future. In the 1930’s the Ludlow Amendment, introduced by Senator Louis Ludlow several times between 1935 and 1940, and voted on in Congress in 1938, called for a national referendum on any declaration of war by Congress, except in cases where the U.S. had been attacked first. It’s public popularity peaked at 75%, but support began to fall away after Germany invaded Poland in 1939. 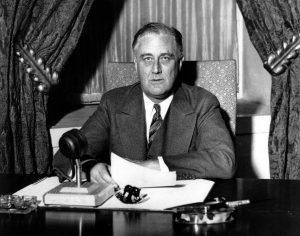 It was aggressively resisted by President Franklin Roosevelt, who wanted the freedom to go to war as he chose. It was defeated in Congress in 1938 by a vote of 209 against to 188 for the amendment. As a constitutional amendment, it would have needed a two-thirds majority voting for it, 290 in the House in order to pass. Thus it came a lot less close to passing than Roosevelt had feared. Then in Sept 1939, Hitler invaded Poland, and at that point the amendment movement lost all hope of succeeding. Also of very limited effect at preventing war during the German military buildup in the 1930s were the various Neutrality Acts passed by Congress between 1935 and 1939.

While the Ludlow amendment and the Neutrality Acts were both well-meaning efforts at preventing unnecessary foreign conflicts, each fortunately did not prevent the US from entering World War II, which almost all Americans view as a morally just and necessary war, at least in hindsight. But as this counterfactual proposes, we could have gone to war in a much better way, both in World War II and in all subsequent American wars, if our leaders, President Roosevelt perhaps most obviously, had used better foresight—and moral insight—at the appropriate time.

Below is a nice video overview on the Ludlow amendment by Jim Lindsay at the Washington think tank, Council on Foreign Relations, publisher of the bi-monthly international relations journal, Foreign Affairs. It gives a brief peek at the social conditions that generated the amendment.

Most notably, Lindsay reminds us of the “Merchants of Death” thesis, the phrase the public used in the 1930s to describe the war profiteering and inappropriate influence they suspected that US banks and armaments companies had engaged in during World War I. This thesis was argued in a popular book at the time, Merchants of Death, by Helmuth Engelbrecht and Frank Hanighen, in 1934. Dozens of other books in the 1920s and 1930s made the same argument, even claiming that banks and arms manufacturers had “tricked” the US into entering World War I. Particularly influential was War is a Racket (1935), by Smedley Butler, a Major in the US Marine Corps during the war.

The Senate conducted a hearing into these allegations, the Nye Committee, beginning in 1934, headed by Senator Gerald Nye.  Nye found no evidence of trickery, but he did document obscene profits made by the arms industry during the war, and to address this outrage, we can easily imagine a “clawback” feature for excessive warmaking profits in future defense policy, returning such funds to the state. Nye also found examples of price fixing between defense contractors and government, when open bidding should have been used, and found that bankers had pressured President Woodrow Wilson to intervene to protect their loans abroad. The committee’s funds for further investigation were abruptly cut off by elder senators in 1936 when Nye blundered by suggesting, without evidence, that late-President Wilson had withheld essential information from Congress as it considered a declaration of war.

In our counterfactual, Nye did not make his blunder, and the Nye Commission report managed to convince the public of the value of post-war audits of defense industry profits, the need for full transparency in bidding, and the need for “clawback clauses” whenever audits revealed excessive profits. That would have helped us improve the efficiency of our future defense contracts.

Then, in our version of history, around this time Roosevelt, for his part, thought back to the history of occasional Congressional opposition to executive branch warmaking, beginning with the War of 1812, and about the honorable intent of the Neutrality Acts. Rather than seeing these as threats to his power, he realized that he had a rare historic opportunity to fashion an amendment that would, if imitated by other democracies, might lead us to a safer world. In other words, he had a small change of heart, and a major flash of long-term foresight, realizing he could guide a useful improvement to American constitution, a rare Presidential contribution indeed.

In our alternate world, Roosevelt has a secret conference with Ludlow in 1938, before his amendment goes to the floor of Congress, where he feared it might pass. Roosevelt says he might support such an amendment if its language was improved. Ludlow’s amendment already had an exception for when any nation attacked us first, as an obvious act of self-defense. Roosevelt argues there are many other less obvious forms of self-defense, including the global defense of democracy against aggressive autocracy, and the general defense of humanity against “immoral acts”, like genocide, committed by autocrats. The need for war in such cases may not easily be understood by American voters, particularly in advance. In such cases, the burden should be on the President, post facto, to make an expanded self-defense case, which might, or might not, include a general defense of human dignity and democracy, to the public. The public could then be allowed to periodically validate, or not, the case the President made, for any war exceeding a certain size and duration.

In the new amendment, the President lost no warfighting powers, but was now required to morally justify the war in annual State of the Union addresses. Every four years—a duration chosen because it is a presidential term and the length of World War I–the public would be allowed a national vote on whether continuation of any war of that length seemed to be justified or not.

In our counterfactual, while this modified amendment was being considered, Germany invaded Poland, as it did in September 1939. In return for his support for such an amendment, which many Congressional leaders would have favored as a limit on executive power, Roosevelt gets Congressional leaders to pre-agree to a resolution authorizing him to provide immediate military assistance to Great Britain. In our history, the amendment and resolution are crafted in 1938, pass in 1939, and we began fighting Germany alongside Great Britain beginning in 1939, rather than passively via the Lend-Lease Act in 1941 and actively in North Africa only in 1942.

The four year timeclock in the modified Ludlow amendment would have also provided an incentive for military leaders to achieve decisive victories in a reasonable timeframe, preventing the endless wars that were so common in earlier eras of government. If you can stomach it, take a look at Wikipedia’s List of Longest Wars in known history, beginning with the 800-year Germanic Wars of 220 BCE.

As a result, our war against the Axis forces in Europe might have been over in four years, rather than the five it actually took. Our military leaders can get very motivated and efficient when they have a deadline. We would likely still have built and dropped the atomic bomb on Japan, as our war in the Pacific was over in four years. But some other aspects of World War II might have turned out quite differently. 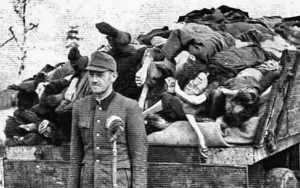 As an obvious example, we might have uncovered examples of Nazi atrocities much earlier, and better documented Japanese atrocities as well, if annually summarizing such atrocities for the public, as part of the moral justification for war, became a new responsibility of the President. Thus our intelligence agencies would have been directed to seek and uncover examples of immoral autocratic behavior. Earlier identification and publicizing of the Jewish holocaust (1941-1945), and the atrocities committed in Japanese concentration camps, might have acted to limit further commitment of such atrocities by Germany and Japan. Once the perpetrators of atrocities know they are being watched, their strategies usually change.

What other wars might have turned out differently? Would such an amendment have prevented the Presidents’ undeclared wars, each of which has sidestepped Congressional approval processes, including the Korean War, the Vietnam War, and the Iraq War? Perhaps so. In an enlightened democracy, we can hope that both congress and the public will have greater checks on the President’s war-conducting powers.

Would the passage of modified Ludlow amendment in 1939 have made our sixteen-year Vietnam War far shorter and more decisive? I think so. It might also have led us toward the kind of quick solution offered in our counterfactual, 1965: A Successfully Defended South Vietnam. Would a modified Ludlow amendment have made our sixteen-year war in Iraq and Afghanistan far less lengthy and costly, and more effective? I definitely think so.

A future modified Ludlow amendment will have to allow a variety of special forces and drone warfare exceptions to referendum-requiring wars. Wars, after all, are conflicts above a certain size, and with a certain duration. A 21st century Ludlow amendment will finally keep us from spending trillions of dollars, such as the $4 to 6 trillion so far for the Iraq and Afghanistan war, against nonstate actors and minor third world dictators as we do today. Such wars massively enrich our defense industry, provide little useful innovation for society, and unfortunately create new enemies like ISIS in the process.

In today’s intelligence-rich world, atrocity-committing autocrats like Saddam Hussein, Muammar Gaddafi, and many current African and Southeast Asian dictators, can be far more efficiently removed via special forces operations, which would get an exception from the warfare clause if they were kept below a certain size and duration, than via conventional warfare. Any truth-telling special forces and intelligence leader can remind us of this fact. This realization, once acted upon, can push global conflict in the direction it needs to go, away from war profiteering and endless wars and toward the most effective use of force in securing the world. While our intelligence and special forces operations continue to grow and are in general very beneficial trends, restraint on the conventional forces side remains far less than it should be in a more foresighted world.

I am hopeful our smart agents will help us vote a modified Ludlow amendment, or something like it, into existence in coming years. In the meantime, we do what we can.